Behind the festival: A conversation with Garboyl Lives

There are festivals we love so much we just can’t stop ourselves from talking about them. Take SonicBlast, for example, a festival dedicated to stoner music and one of the best Portugal has to offer. With its eight edition closing in quickly – it starts this Friday -, we decided to visit Moledo, where SonicBlast is held every year, ahead of the festival, in order to breathe in the vibes of the area and to talk to the people that make it happen every year. And after a time well spent by the beach, we sat down with Ricardo and Telma, the power couple behind Garboyl Lives and the founders of SonicBlast Moledo.

“Most people don’t listen to music in Portugal, they’re not interested in discovering anything new”. It’s with this statement that Ricardo starts off and one can see why. We spent some time talking about some of the festivals in Portugal and how they’ve molded themselves to appeal to a bigger audience and how there’s a lack of interest in bringing new bands to the table. Smaller festivals like Milhões de Festa and Amplifest have invested in bringing new and exciting projects into the spotlight, whereas most of the bigger festivals keep pushing the same names, the same line-ups, year after year. For Ricardo and Telma, creating SonicBlast was the perfect opportunity to bring into the spotlight a genre that had never been too sought-after in Portugal. “We wanted to create an alternative music festival. The idea was to explore the more psychedelic side of rock and genres influenced by bands like Kyuss, Melvins and Sleep. And by old school metal, of course”.

Both Ricardo and Telma come from Moledo, a small and peaceful town in the north of Portugal, but their adventure in the world of event promotion started elsewhere: SWR Barroselas Metalfest. “We worked at SWR a long time ago. At the time, we already had the idea of starting something on our own and we were at SWR helping them with all the construction and stage setting. We then managed a few of the bars and formed a team to serve beer and whatnot. We liked that experience so much that we decided to do something similar in Moledo”. Being part of a festival with such rich history as SWR gave them the experience and drive to try something on their own and the result was what would once become an important mark and mandatory stop for anything stoner: SonicBlast.

“We worked at SWR a long time ago. (…) We liked that experience so much
that we decided to do something similar in Moledo”

SonicBlast was created in 2011, not long after the couple’s stint at SWR. It started out as a single day festival, with a few Portuguese bands like Plus Ultra and Mr. Miyagi, but through dedication and a bit of luck, it grew into something larger. On the two following years, it already had bands like Sungrazer, Samsara Blues Experiment, Kadavar and Mars Red Sky on its line-up. But it wasn’t until 2014 that the festival made its breakthrough in the festival scene.

In a time where the stoner genre was rising into prominence and festivals like Reverence started to appear as well, SonicBlast was upgraded to a two-day festival, a decision Ricardo says was both a risk and a much needed step. “It was a risk but also a necessity. For those that come from far away, coming to the festival for just one day isn’t too compensating. So, with two festival days, they have more bands to see, they can relax for a little longer and even check the surroundings, which was one of our goals. Festivals make it so that the people who are attending get to know the surrouding area and for us that is very important”. The way the festival is layed out, with the camping site being on one side of Moledo and the festival grounds on the other, also plays a part in this desire of wanting the festivalgoers to explore the town.

This year, SonicBlast is bringing to Moledo bands like Earthless, Kadavar, Ufomammut and Nebula, in an edition that is completely sold out for the second year in a row. When something like this happens to a small festival it’s a good thing but it also raises the question of whether or not it will bring drastic changes going forward. Like a change of venue, for example, or shaking things up to start bringing a bigger audience. But Ricardo and Telma ease our minds in this matter. “We don’t want to go somewhere far from here, so we’ll be increasing the size of the festival grounds and possibly have one more day in the future. Basically, we will try to remain here and expand little by little within reason. We want the festival to maintain that familiar feeling and not for it to grow too much or have bands that are too big because that implies a whole different level of logistics and expenses which can lead to bad results. We’d love to have bands like Mastodon playing but it’s complicated”.
This, however, doesn’t mean they will stop trying to improve the festival. Quite the contrary, in fact, as many areas have been improved when compared to last year. “Mainly, there have been internal improvements, as well as better conditions for both the bands and the public”, Telma explains. “There will be more restrooms and showers, all that is being bettered. We will have team members greeting the festivalgoers from the start in order to show them where everything is and we will be at the venue in between the warm-ups to start exchanging festival tickets for wristbands. We have also doubled our team at the ticket office during the festival days and there will be some team members among the audience, selling food and drink tickets, to make everything go smoother”. But not everything is dependent on them. Some changes, like expanding the camping site, involve several entities that have to approve and legalise the whole proceeding. But Garboyl always tries their best to provide the best festival experience possible to everyone attending. As for future changes, they mention having a third festival day if the need arises, but also increasing the usage of the Pool Stage, mainly by having concerts there at night and not just the afternoon, in an effort to create alternatives for the festivalgoers.

But not all changes are based on a need to improve, but rather to keep things fresh. Some of you may have noticed that the festival’s logo and overall design has changed over the years and that has a very good reason behind it, as Ricardo explains. “It’s to keep the visual aspect fresh. We like all the logos and posters that have been made for the festival, but we also like to change and innovate a bit, so that everything remains fresh”. It is also a chance to give artists an opportunity to work on the festival, as Ricardo continues. “Usually, we work with a local tattooer called Pedro Guardão (Till the Grave Tattoo), but this year he was a bit busy, so we hired Robin Gnista, a Swedish designer, instead. We love his work, especially the album covers he has done. And with him, I think it worked out fine. We want our posters to be artistic, to have a soul. And we give the artist total freedom to do his or her thing. That’s why we always look for someone that fits the style we want to portray”.

“We want our posters to be artistic, to have a soul.
And we give the artist total freedom to do his or her thing”

Thanks to this concern with the visual aspect and presentation of the festival, SonicBlast has gathered the attention of more than just it’s Portuguese audience. In fact, a lot of the tickets this year went to countries like New Zealand, Australia, Norway and the United States. For Ricardo and Telma it’s an incredible honour but it also brings a new level of responsability as the audience of the festival starts to be more knowledgeable and picky on what they want to see. It’s no small task and they consider themselves lucky, but to us it’s not just luck, but also talent and having an eye for business.

It’s not just people from all parts of the world that want to attend the festival, though, it’s bands too. One such band that has demonstrated an interest in playing the festival time and again is Electric Moon, a power trio from Germany that is well-beloved by the Portuguese audience, to the point that some expected them to be at this year’s edition. “Next year!”, exclaims Ricardo in between laughter, “I’m just kidding, but it is a band that we have been trying to bring to the festival for a few years now, they are really good. There are bands that we’ve been trying to bring here for some time. We had been after Earthless for a long time, for example, and only now have we been able to get them to play SonicBlast”. It’s understandable that sometimes it’s impossible to bring a specific band as most of them aren’t on tour all the time. And bringing one straight from California, for example, isn’t exactly cheap. “It’s really complicated”, Ricardo elaborates, “It’s costly and sometimes the band’s don’t have that programmed in their lives, since they might be on vacation with their families. We’ve had that happen to us before. When Kadavar cancelled in 2017, we almost had John Garcia replace them, but he was on vacation with his family. He was up for it, but ultimately his family didn’t allow him. In the end, it really depends on the artists’ availability”.

Apart from the festival, Ricardo and Telma also book shows around Portugal, mostly in Porto, something that happened naturally over the course of the couple’s life as promoters. “It happened as events unfolded. We started with SonicBlast first and later down the line we had the opportunity to bring to Porto a band that had been previously on the festival: Sungrazer, who at the time were touring with The Machine. We liked that experience so much that we started to contact more bands to bring over”. Radio Moscow, Stoned Jesus and Colour Haze are some of the bands that have come over by the hands of Garboyl and later this year they are booking the return of Voivod and Sasquatch to Portugal, on September 26th and October 9th, respectively. As a final question, we asked them what are the bands that they would love to book, both solo or at the festival, and the response couldn’t be any better. “A cool line-up would be Sleep, Melvins and… Slayer!”, reveals Ricardo as he laughs, “But yeah, bands on that vibe, like John Garcia, Clutch and Fu Manchu, which are names that we haven’t been able to book yet, but we’ll keep trying of course. We do this with love”. As for this year, Ricardo and Telma name Kadavar, Earthless, Ufomammut and Mantar as their must-see bands, but they do want to check the entire line-up, as it should be.

SonicBlast Moledo 2018 takes place at Centro Cultural de Moledo, on August 10th-11th. There will be a free entry warm-up party on August 9th at Paredão 476 and Ruivo’s Bar. You can check the entire line-up and schedule, here. 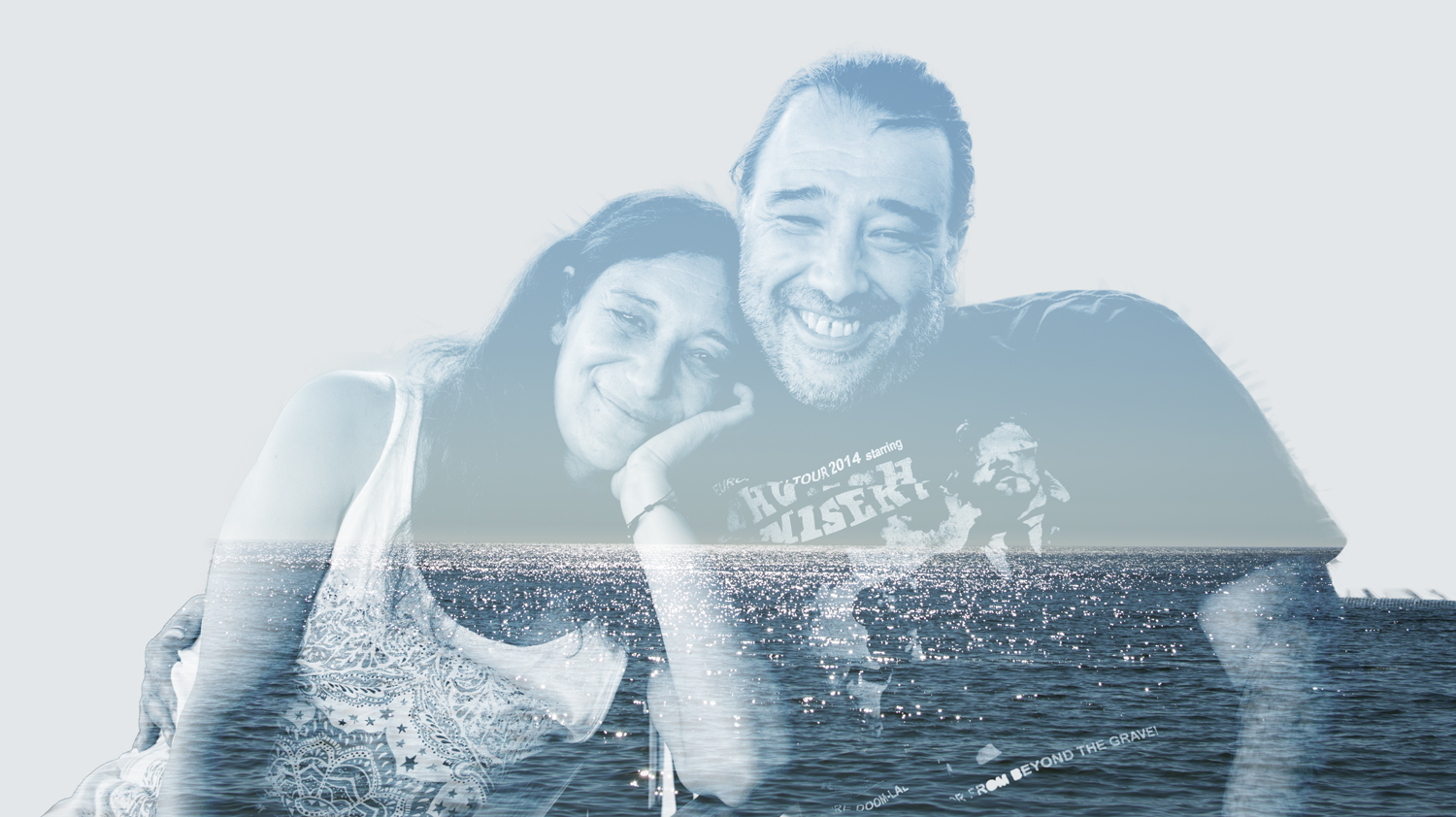 This author hasn't written their bio yet.
loreadmin has contributed 170 entries to our website, so far.View entries by loreadmin