Blood Year: An interview with Brian Cook of Russian Circles

Instrumental post-rock is a genre that has grown a lot over this past decade. Ever since bands such as Explosions in the Sky and Godspeed You! Black Emperor dipped their toes in the music scene, other bands have emerged with an interest in creating cinematic atmospheres, with a lot of them having emerged in this decade past. Though they would not consider themselves to be a post-rock band, Russian Circles are an undeniable player in the field and records such as Station and Memorial are proof of that, having helped pave the way for a new era of instrumental bands that have increasingly made their presence known in great festivals and elsewhere.

Last year, the trio of bassist Brian Cook, guitarist Mike Sullivan and drummer Dave Turncrantz released Blood Year, their seventh studio album, which has been described as a more direct and much heavier record than its predecessors. Recently, we spoke to Brian about this very same record, as well as his thoughts on the instrumental post-rock scene, the band’s upcoming tour with Torche and subsequent return to Portugal. Take a look.

Hello! First and foremost, with whom do we have the pleasure of talking to and how are things in the Russian Circles camp?

Brian Cook, I play bass, Moog Taurus, and a little bit of baritone guitar in the band.

You have a new album, Blood Year, which came out last year. In comparison to your previous works, how did you approach this new album from a creative standpoint?

We wound up touring on our previous record a lot more than we’d anticipated. I think it switched our mode of thinking from “we’re a band that makes records” to “we’re a band that lives on the road,” and that changed the way we approached writing. We didn’t want to make a lush, intricate record like we had in the past because that isn’t representative of the material we gravitate towards in the live setting. We wanted to make a record that reflected the intensity of our shows, so we deliberately made the new record more stripped-down and straightforward.

Like with your previous record Guidance, recording duties were once again taken over by Kurt Ballou. How was it working with him again? What do you feel he brings to the table as far as recording and production?

We like working with Kurt, he’s good company. And he’s a wiz in the studio. Ultimately, we like his specific balance between capturing live energy and utilizing the studio to enhance the recording. I want our albums to be an honest representation of our sound, but we also want to be able to make little embellishments, and Kurt is on the same wavelength as far as striking that balance.

The artwork for Blood Year was done by Orion Landau. In the past, you’ve utilized photographs as the cover, what made you change your approach?

I think it was another reaction against our previous album, Guidance. That album utilized these photos of public executions in China from the early 20th century that someone had given my husband, and we were all intrigued by them because there was no context, no story behind them, just these stark, tragic photos from some distant time and place. But even though we cropped the photos to eliminate the violent imagery from the layout, after awhile it started to feel a little like those old crust punk records with brutal war photos on the cover. Like, it’s taking other people’s misery and refurbishing it into art. I feel weird about that, maybe we all did. So, we were all on board to go with something a little more abstract, a little more design-focused. We love what Orion did with Red Fang’s Only Ghosts album, so we hit him up and he nailed it on the first try.

“We wanted to make a record that reflected the intensity of our shows, so we deliberately made the new record more stripped-down and straightforward.”

How important is it for you to create a connection between the artwork, the graphics and the music when constructing a new album?

Well, none of us are graphic design experts. I majored in studio art in college, so the visual component is important to me, but I’m not good at applying those skills into creating packaging. We all value a certain amount of ambiguity in our album art, but deciding on a design that conveys a feeling without forcing an idea into your head can be a challenge.

Over the years, Russian Circles have recorded with various musicians, one of them being Chelsea Wolfe, who sang in the eerily beautiful title-track of Memorial. What was it like recording that song with her?

There isn’t much to tell. We had toured with Chelsea a year or two prior and we’d talked about collaborating in some capacity. Mike wrote the music with her in mind, we sent her a file, and a day later she had her parts all written and recorded. It was a very smooth, seamless collaboration. We’re stylistically different artists in a lot of ways, but we both seek to convey the same kind of emotions.

Are there any other artists with whom you’d like to collaborate with in the future?

I enjoy collaborations but we have to bear in mind that we most likely won’t be able to play those kinds of songs live, and given that we’re a touring band, it doesn’t make sense for us to devote a bunch of time and energy to making music we can’t perform live. So honestly, there are no artists I’m pining to work with at the time.

During this past decade, there has been an emergence of instrumental post-rock bands. How has this changed the way you approach music? What are some of the bands you listen to?

My first tour with the band was back in 2008, when we did a short string of shows with Red Sparowes. I remember “post-rock” coming up in a conversation backstage at some point and our guitarist Mike asked “what is this post-rock thing I keep hearing about?”

Red Sparowes’ guitarist Cliff just kinda chuckled and was like “uh… this thing we’re doing… that’s post-rock.” Now it seems like an absurd question, but when the band started, the label wasn’t something on our radar. It’s like someone referring to Fugazi or Shellac as “post-hardcore.” Aren’t those bands just, I don’t know… punk? Russian Circles just wanted to be a band with a lot of dynamics and a lot of musical drama. We weren’t trying to be a part of a specific sound or scene. We were honestly worried about being lumped in with a lot of the more frantic, mathy stuff like Hella, Don Caballero or Lightning Bolt. That’s not meant to be a diss on those bands, but back in the mid-’00s that kind of stuff really seemed to be flourishing and we didn’t want to come across like we were jumping on that bandwagon. But instead we got filed in with all the bands that came in the wake of Explosions in the Sky, and frankly that stuff doesn’t interest us at all. I mean, we like Tortoise, Labradford, Trans Am, and Godspeed You! Black Emperor, but I don’t think of those bands having much in common with each other.

If I’m going to listen to instrumental rock music, I’m way more likely to listen to Popol Vuh, The Meters or one of those first three Kraftwerk records. Most of the stuff that gets categorized as post-rock doesn’t really appeal to me. That said, I did listen to a couple of Growing albums last night, maybe they qualify as a post-rock band?

What would you say are some of your influences both inside and outside of music?

I’m always interested in artists that create their own subcultures. Any time someone is able to carve out a place for themselves outside of the mainstream, I find it inspiring. That may seem like a bit obvious, but I feel like a lot of time people don’t see the parallels between, say, The Beats, the krautrock bands, the Dadaists, the free jazz musicians of the ’70s, the hardcore bands of the ’80s and ’90s, the surrealists, the magical realists, the desert blues artists of Mali, and so on. If you make something and it thrives outside of Western mass-commercialism, then that’s exciting to me.

During the band’s career, there have been numerous visits to Portugal. What fond memories do you have from playing here? Any particular shows that stand out?

We love Portugal. Ever since we played there with These Arms Are Snakes back in 2008, we’ve looked forward to traveling through Lisbon and Porto. Playing Amplifest with Chelsea Wolfe and Body/Head back in 2013 was a big highlight. Honestly, I just love walking through the city streets and driving through the countryside. The landscape is so beautiful.

What are you most looking forward to in this upcoming European tour with Torche and your return to Portugal in March?

I’m really excited for the entire Iberian peninsula, to be completely honest. I’m ready for the warm air and the sunshine, the tiled roads, the seafood and the warm reception from the people. I just love that corner of Europe.

Besides this upcoming European tour, you also have some dates in Japan and the States. After those are done, what is next for Russian Circles?

We’re going to start writing some new material, but we’ll also do some touring to cities we missed on our previous tours in support of Blood Year.

“We love Portugal. Ever since we played there with These Arms Are Snakes back in 2008, we’ve looked forward to traveling through Lisbon and Porto. (…) Honestly, I just love walking through the city streets and driving through the countryside. The landscape is so beautiful. “ 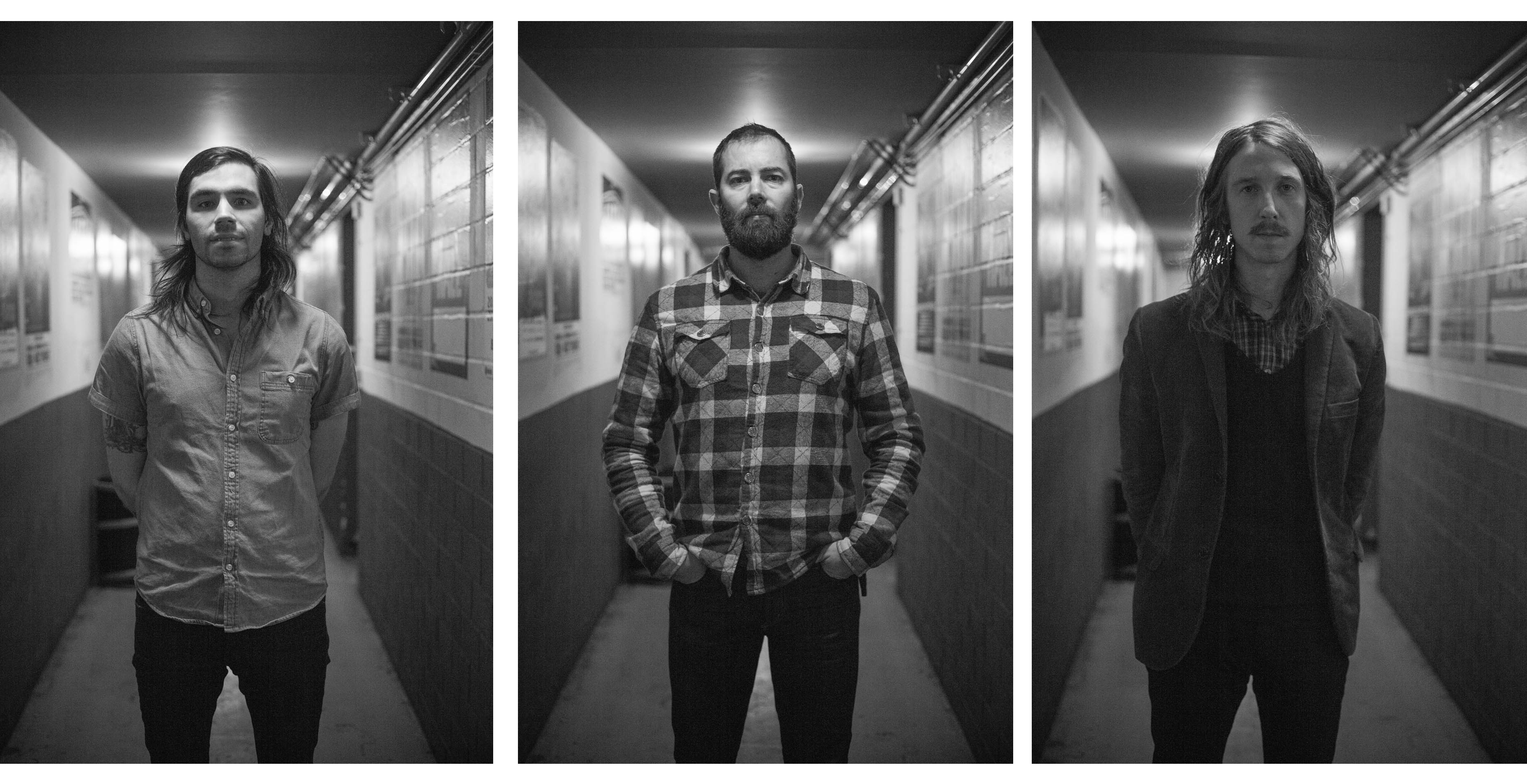