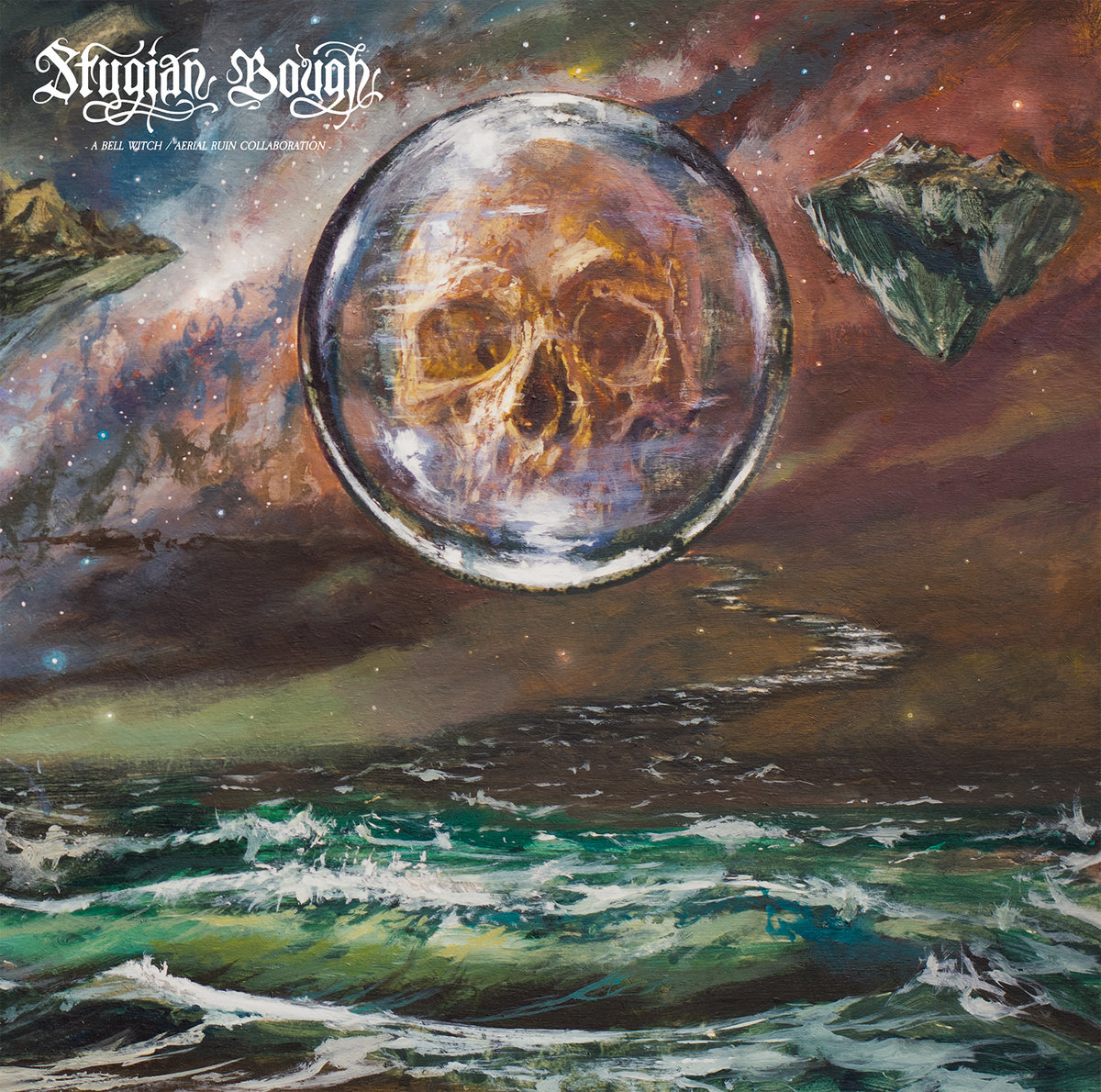 One of the things I like the most in the realm of music, especially that of the underground, are collaborations between artists. There aren’t many things better than seeing two or more of our favourite artists and bands join forces together and delve deep into new facets of their sound, exploring new and interesting concepts that are sometimes left out when recording a regular release. Examples of brilliant collaborations over the years are bountiful – Full of Hell and The Body, The Body and Thou, Sunn O))) and Boris, Nadja and OvO, Merzbow with pretty much everyone from Keiji Haino and Xiu Xiu to Genesis P-Orridge and Sonic Youth, just to name a few. The record I will be talking about today, entitled Stygian Bough: Volume I, is one such collaboration that is bound to join the aforementioned collection of excellent records and that brings together two great projects that have a genuine and mutual interest in experimenting with new ideas. On the one hand, we have Bell Witch, the duo formed by Dylan Desmond and Jesse Shreibman, who employ a monolithic doom/sludge sound that contains not only slow funereal passages but also moments of meditation and introspection. On the other hand, we have Aerial Ruin, the solo acoustic project of Erik Moggridge, whose rich and meditative dark folk music evokes a sense of both solitude and wonder. Despite the apparent distinctive nature, these two projects have plenty in common when it comes to lyrical themes and even their sound, when looked at in detail, is not far from one another. In fact, Erik has taken guest vocal duties Bell Witch’s previous records – Mirror Reaper, Four Phantoms and Longing. Therefore, it’s natural to believe that a full-on collaboration between them is a match made in doom heaven.

Produced by the legendary Randall Dunn (Master Musicians of Bukkake), mastered by Bob Weston (Shellac, Mission of Burma) and featuring amazing artwork by Adam Burke (Nightjar Illustration), Stygian Bough: Volume I starts off with “The Bastard Wind”, which contains a long and soothing acoustic guitar passage sung and played by Erik, until both Dylan and Jesse enter the scene with their crushing doom. It serves as a premonition of the atmosphere that is felt throughout the record and is demonstrative of how well Bell Witch and Aerial Ruin sound together. The pensive and dragged riffs of the former are complemented nicely by the mesmerizing and serene voice of the latter, a combination that is nothing short of perfect. On “Heaven Torn Low I (The Passage)”, Aerial Ruin takes center stage in a beautiful acoustic piece that calls back to his own records and on “Heaven Torn Low II (The Toll)”, he is again joined by the powerful drum pummels and potent bass sound of Bell Witch, in what is a more Mirror Reaper-esque song. The real beauty of this record is that each song stands out on its own and could very well be on a regular release by either group, but they are so incredibly well-crafted and complemented by each artists’ instrumental and vocal mastery, that one starts to understand why this collaboration had to happen in the first place.

“Prelude” serves as a nice instrumental respite featuring a really cool and minimalistic organ ambience and the “The Unbodied Air” brings everything to an end with its somber and foreboding vibe, where the vocals get as cavernous as funeral doom demands, without refraining from an acoustic mid-section and a bellow of chants, organs and guitars at the end. It serves as the perfect closer to an enormous record that deserves to be played countless times. Even though we are still in the middle of the year, I can safely say that I wouldn’t be surprised if Stygian Bough: Volume I topped most end-of-the-year lists, as it is a damn near-perfect record. It is a true masterpiece in both groups’ careers and I can’t wait to hear the next volume.

This author hasn't written their bio yet.
Filipe Silva has contributed 299 entries to our website, so far.View entries by Filipe Silva