TALES FROM THE WASTELAND: SWR BARROSELAS METALFEST 22 – DAY 0 AND 1

Welcome back to SWR, ladies and gentlemen. The Colloseum, the Circle of Slaughter, the Thunderdome, where all your most fervent and metallic wishes come true. As a friend told us during the course of the festival, SWR is what would happen if the world went to nuclear shit Mad Max style and all that remained from the blast were a few thousands of people and one underground metal festival. I fail to come up with a more perfect analogy than that, to be quite frank, so there you go. And it’s quite fitting considering the style that the organisers have adopted in these past couple of editions, with this year being no different. You got your two towers of tires at the entrance, spike-haired punks, chained metalheads, roulottes with food and drinks, the concrete floors perfect for some bloody moshing and partying, the camping site in what could very well be the last remnants of vegetation of a dying world and everything in between. The only thing missing, really, were the insanely over-the-top cars full of spikes, though I’m sure will get to that point someday.

But you came here to read about the “freakshows”, haven’t you, you depraved human? Well, don’t let my ramblings stall you from reading about all the fun we had during this marvellous weekend at the edge of the universe. Well, this year things started rather warm and slow as the Swedish stoner rock quartet Electric Hydra took the stage. I’ll commend the vocalist and company for a rather energetic performance, but try as they might, their spark just couldn’t captivate the SWR audience, that had its mind on what was coming up next – the WOA Metal Battle Portugal finals. 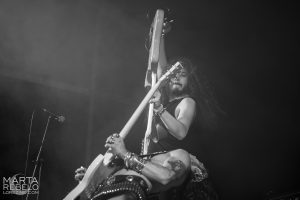 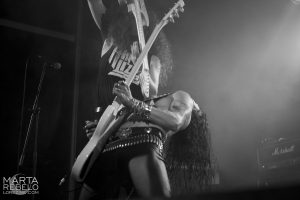 What kind of SWR edition would this be without the infamous WOA Metal Battle Portugal finals? Not as good, probably. First up were Roädscüm, the bastard sons of metalpunk who turned almost every steel warrior present into a road warrior with their fast-paced apocalyptic riffs and rowdy attitude. Next came a bit of a boring display by Diabolical Mental State, of which I will refrain from saying anything too bad. Their “bora la caralho” type of sound just doesn’t do it for me, so I really needed a refreshener. Thankfully, the grind masters of Grog didn’t take too long to show up and they simply devastated the stage with their highly concentrated dose of pure, no bullshit death metal. This, of course, resulted in them winning the “cup” and the right to play in Wacken Open Air in August – wherever that is. Personally, I would have preferred for Roädscüm to have won but none of us get to vote in these matters, our warlords do. Still, a much deserved win by Grog so congratulations to them.

The unfortunate cancellation of Sacred Sin, who were supposed to play after the Battle was over – guess they didn’t survive the nuclear blast that brought us to this piece of hellish delight -, allowed the DJ from Metal Horde to spew even more classic tunes from the 80s and 90s than originally planned. I’m talking Vengaboys, Aqua and even The Immortals’ Techno Syndrome, for all you Mortal Kombat afficionados. Yeah, you missed a pretty cool party.

After a well-deserved rest from day zero and a nice lunch which consisted of a mix between some healthy food and a not so healthy dessert, our gang headed back to the SWR camp to continue on with the festivities. Starting with a rather fast visit to the SWR Arena, we caught the Belgian crossover party thrashers Turbowarrior of Steel, who were entertaining the warriors arriving in waves for the true first day of the festival. The Brazilian Woslom followed suit by opening the Loud! Dungeon stage with their more 80s oriented thrash metal, but it was only when Analepsy hit the Warriors Abyss stage that things started to really heat up. Playing a set mainly focused on their debut record, Atrocities from Beyond, the Portuguese quartet once again demonstrated why they already are a reference within the slam scene, despite being a relatively new band – their brutal sound is indeed a breath of fresh air to the genre. They even had time for a special guest appearance by Sérgio Afonso (Bleeding Display, Scent of Death), who joined the band to perform “Engorged Absorption” from their aforementioned debut record, as well as “Viral Disease” and “Genetic Mutations” from their debut EP, Dehumanization by Supremacy. A really cool gig, overall.

The destruction of the Abyss proceeded with Venenum, who cut the atmosphere like a knife and enveloped every warrior present with the darkening cloak of old school death metal. Dead set on presenting their debut record, Trance of Death, the German trio played relentlessly and without pause to an audience that could only but stand in awe of their savagery and greatness. Over at the Dungeon, the Italian Grime were seen and heard delivering crushing doom blows that bellowed from the very depths of Hell. Returning to the Abyss, we eagerly awaited the coming of Midnight who, despite their name, did not play at the stroke of midnight. A minor dissatisfying detail, but the dudes themselves did not disappoint in the slightest. Hooded and clad in bullet belts and spikes – as true road warriors from a certain post-apocalyptic film series would be -, Athenar and company laid waste to the stage from the get-go, playing classic after classic from their vast repertoire, including “Penetratal Ecstasy”, “Evil Like a Knife”, “You Can’t Stop Steel” and my personal favourite, “Satanic Royalty”, among others. “Unholy and Rotten” finished what was the most aggressive and entertaining set of the day, which even saw Athenar jokingly threaten to throw an amp onto the audience. Fucking hilarious.

Midnight being the best of the day doesn’t mean, however, that the rest of the bands that played weren’t the least bit enjoyable – quite the contrary in a couple of cases. Sublime Cadaveric Decomposition are already an household name at SWR and seeing as grind is a well-preserved tradition of the festival – and SCD had released a new record since their last SWR performance -, it made all the sense in the world for them to come back. And we are all fucking glad they did because after the intensity that was Midnight, someone needed to keep distilling pain and suffering. There is not much to say about the show itself, it was a grind gig as a grind gig should always be – short, punishing and sweet. The Black Dahlia Murder carried on this sentiment somewhat, with their death metal with melodic and hardcore inclinations. Then came the band that I personally was most excited to see and felt the most disappointed by. Not by the performance itself, but by how incredibly short it was. Nevertheless, it is not everyday you get to see Godflesh live on stage, so I guess this would have to do. Playing material from almost their entire discography, Justin K. Broadrick and G.C. Green howled and stomped their way to a demolishing albeit brief set that included songs such as “Sterile Prophet”, “Predominance” and “Post Self”, this last one from their most recent record which bears the same name. The colossal “Like Rats” wrapped it up and all I was left with was a wish that they come back soon for a real and longer gig. A bittersweet performance, for sure. The rest of the night was reserved for the insane punks of Acid Cannibals and the metal-infused funaná of Scúru Fitchadu, who entertained everyone still standing in their own way. It was a lovely day.