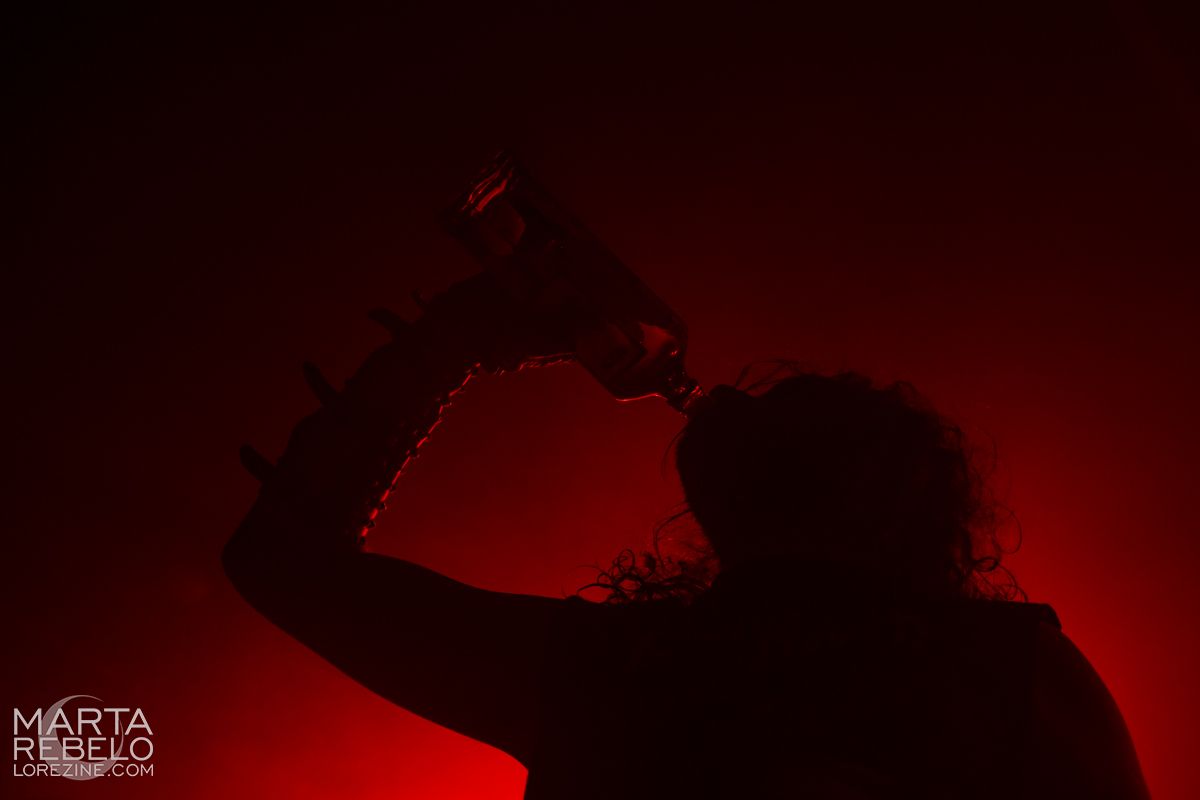 It could be said that the best way to enjoy an old school death metal concert is with a cold beer in your hand. And we certainly were inspired by that motto, were not the first band of the night called Alcoholocaust. If we had to describe Alcoholocaust, we might say they are an alcoholic and blasphemic preachers that happen to play speed/thrash metal on stage. Formed in 2005, in the city of Covilhã, with an uncompromised mindset, they have since released two Demos – that you might like to know, are hand-numbered and limited to 666 copies each. Later this year, they will be releasing their first full-length album named “Necro Apocalipse Bestial”, and while we eagerly await for that date, they seized the opportunity and satiated our appetite by opening this devilish night with “Solução Abismal”, the first track of the aforementioned upcoming release. After this, it was time to remember those nefarious demos with songs like “Supremo Heavy Metal Negro”, “Patrulha do Thrash” and a well acclaimed “Brigada Anti Posers” that was sung with the help of the most enthusiastic audience members. By this time, the room was already conquered by the speedy riffs and thrash beats, as shown by the fists pumping the air and the collective headbang during “Anti Gótico”. The pace of this show, conjugated with the tenacity and simplicity of the music, made us feel reminiscent of iconic bands such as Venom or Sodom. Next, it was time to hear new material again: “Blasfémia Total” and “Bulldozer Infernal” were consummated, as well as the surprise guest named Bushmills, which was escorted by some cigarettes in the process. In order to close the performance, the band had in store two final assaults (yeah, pun intended): “Thrash Metal Ataque” and “Assalto Metálico”. We couldn’t imagine a better way to begin the night, it felt like taking a peak at one of the seven gates of hell.

The time for possession had come. It was with great expectation and excitement that the audience welcomed these five death bringers to the stage. This show was promising to be the well-deserved retrospective of a band that has been hailed as the godfathers of death metal. Possessed were formed in 1983, in the prolific Bay Area, California and it was in 1984 that they released the haunting demo, Death Metal– the one release that some say gave name to the genre. It was, however, on the following year that they consolidated their legacy with the release of Seven Churches, their first full-length album and we dare say, one of the most memorable and iconic death metal albums ever recorded.

Even though they released another full-length album on 1986 and an EP on 1987 –Beyond the Gates and The Eyes of Horror, respectively –, the band decided to put their activity on hold, thus entering the first of two hiatus. After reuniting from 1990 to 1993, a long fourteen year old break awaited and it was in 2007 that Jeff Becerra summoned four evil souls and was able to resurrect Possessed as we know them today. From this tumultuous band history and intermittent timeframe, we harvested some demos, compilations and splits. It was this present year, however, that was chosen for us to receive another devilish curse provided by Possessed, named Revelations of Oblivion, and it was with their “Chant of Oblivion” that we started this solemn ritual at Porto. Following this, the guitars opened the way to “No More Room in Hell”, one of the preview singles from this album. With no rest, we were back in ’85 as the band started to play “Pentagram” and this was provided as the cue by the audience to open an hellish mosh pit that took over the centre of the room and remained burning through “Tribulation”, “Demon” and “Evil Warriors”, and extended until the end of the night. 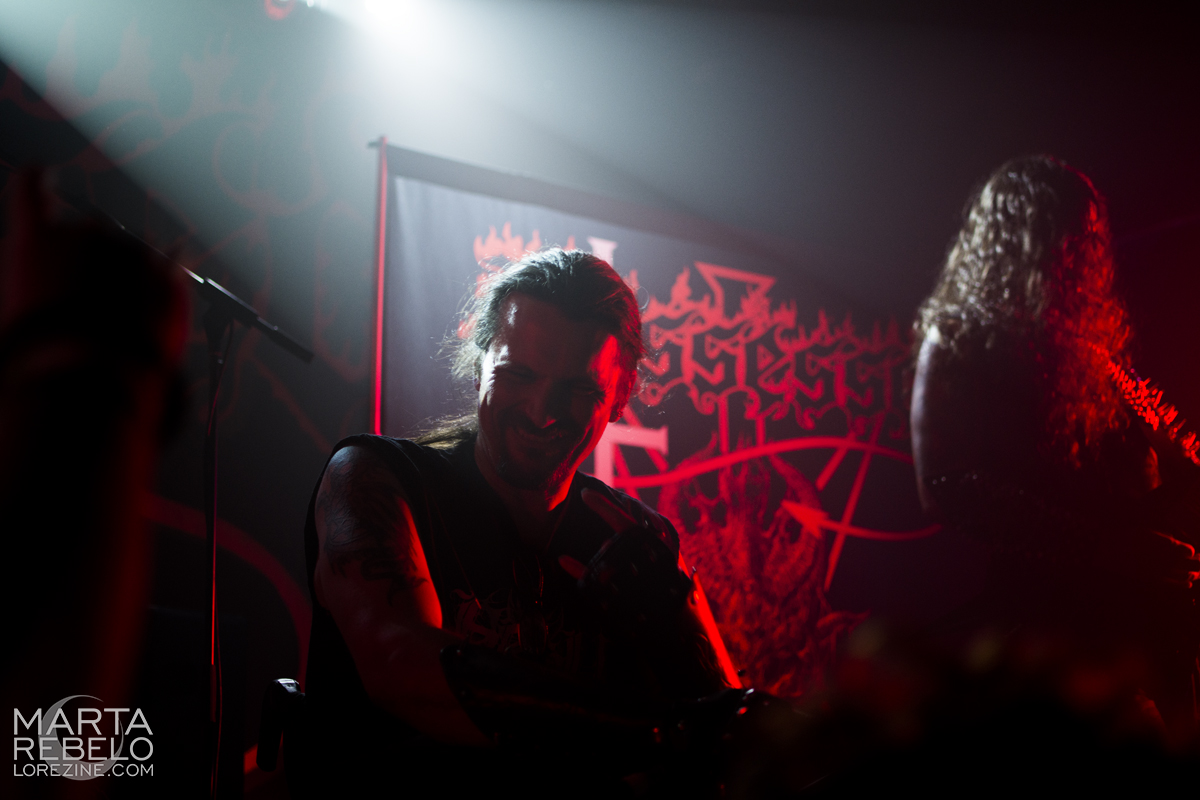 As the night was advancing, the more evident became the energy and satisfaction from the band and, in particular, from the vocalist Jeff Becerra that, beyond the enthusiastic smile and gratitude sayings, cared enough to share some personal thoughts with the audience. After playing “The Heretic” and the recent “Abandoned”, Becerra took the chance to talk about some of his personal demons, being his experience with alcohol and drugs abuse among others. It was with such words that Becerra set the tone for “Storm In My Mind”, a song from the The Eyes Of Hell EP. During this heinous conclave, Becerra had the chance to gladly share the mic with some members of the audience and one that we spotted as recurrent was the well-knowned-in-the-Portuguese-underground-metal-scene Belathauser from Filii Nigrantium Infernalium and, as fans from both bands, this leaved us with a strange feeling of satisfaction. It was time to come back to the present year with “Shadowcult” and “Graven”, both of which were interspersed by “The Eyes of Horror”. In the end, we witnessed one of the most epic song sequences of the year, which started with three hits from ’85 – “The Exorcist”, “Fallen Angel” and “Death Metal” -, and were followed by “My Belief” and finally, “Burning in Hell”. These were, without a doubt, the highlights of the night, especially in “The Exorcist” and “Death Metal”, during which a fiendish mist grew and involved the place, with half of the room gathered in a feral circle pit, while the lyrics and riffs were sung by the others. We finished the night feeling like we walked through the Seven Gates of Hell and it can be said that the hell was empty and all the devils were there.