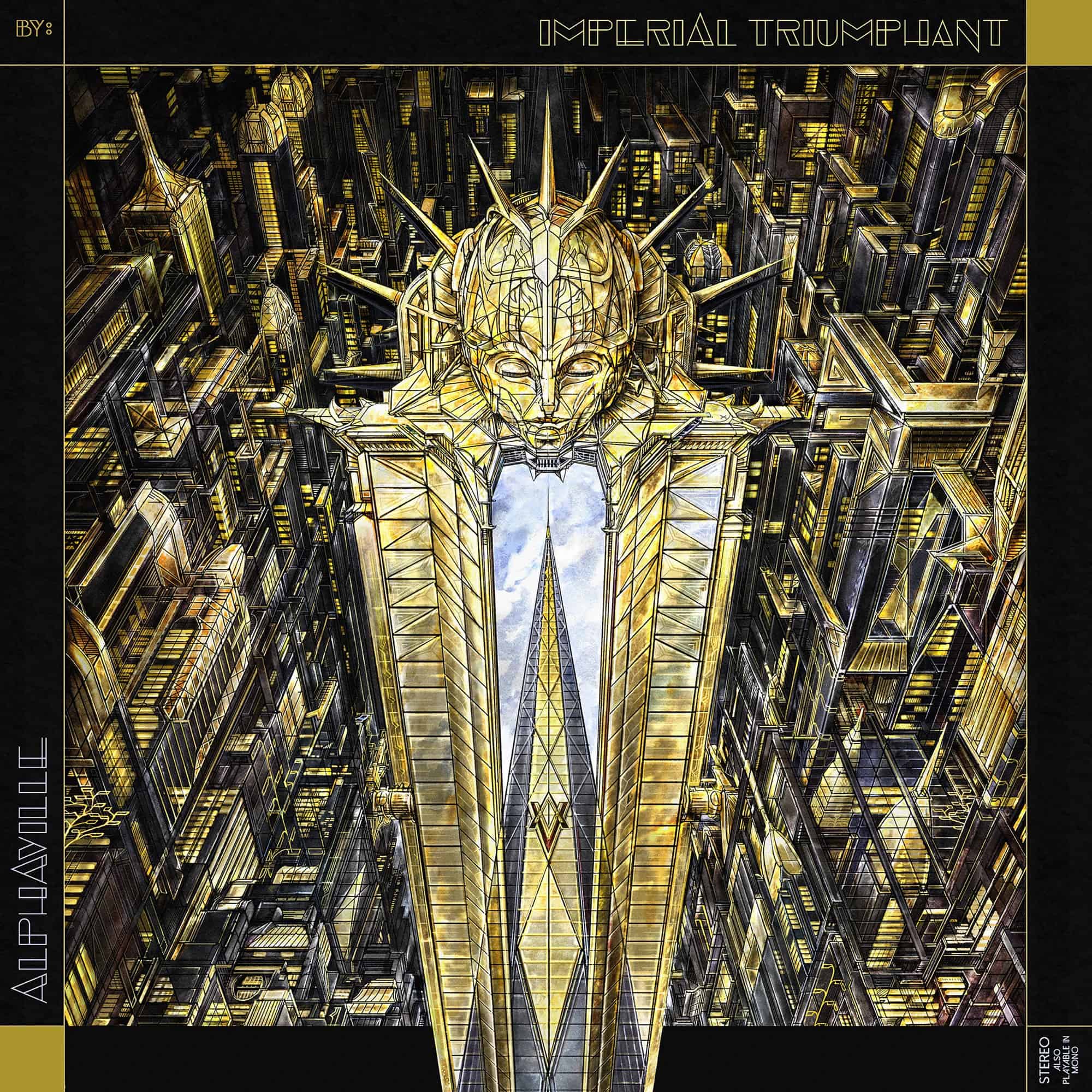 We interrupt our usual broadcast to bring you a very special report on an incredulous and breathtaking occurrence: Alphaville is upon us and none of us were really ready for its magnificence. Ever since the release of Vile Luxury, Imperial Triumphant have enjoyed some time under a bright spotlight and deservedly so, as that particular record was a mark in sonic innovation and improvisation, a relic that proved there is still much that can be done in the death and black metal genres. From the absolutely suffocating walls of sound and maddening dissonance to the majestic melodies, deep howls and eerie choral voices, Vile Luxury was as much of an incredible and unique record, as it was unforgiving and brutal. Never ones to stop the madness, so to speak, and always bent on improving and evolving their own sound, the New York avant-garde metal trio of vocalist/guitarist Zachary Ezrin, bassist Steve Blanco and drummer Kenny Grohowski, have in Alphaville their best work yet, a record that takes us through a dark and contorted rendition of the 20s, which is not too far from our own current reality, which surpasses the highest of expectations. Believe me, the singles that were unveiled up until the release of Alphaville are but the proverbial cherry on top of the cake – the real chaos comes afterwards. Allow me to show you what I mean, as I recount my experience listening to this record.

Named after Jean-Luc Goddard’s eponymous film, Imperial Triumphant start things off by opening the curtain to their twisted and inverted version of New York amidst the roaring 20s with “Rotted Futures”. It all starts with a distant and wailing orchestral crescendo that gets ever closer and suddenly explodes, giving way to Steve Blanco’s incredibly groovy bass play, Zachary Ezrin’s premonitory harmonies and asperous vocals that call back to the technical metal roots of the band, and Kenny Grohowski’s masterful drum fills and hits that set the tone for the rest of the record. As the choral voices of Yoshiko Ohara, Sarai Chrzanowski and Andromeda Anarchia chant “Behold the Future”, I immediately let out an enormous grin – this fucking record will be even better than I had anticipated and I was already expecting big things from it. On “Excelsior”, the voyage through depraved New York continues, as the freeform compositions of Imperial Triumphant start becoming prominent once again, mutating the song over and over, until it reaches another explosive ending, but not before we catch a train to another part of the city. As “City Swine” commences, the band’s warped vision of society starts to take hold via the odd melodies being played and Zachary’s ominous and commanding disembodied voice telling us to not step out of line, lest we be cast out like malfunctioning gears in a cog – middway through the track, the band is joined by Meshuggah’s Tomas Haake for a taiko drum solo that almost sounds like the ceremonial rhythm section for a sacrifice ritual, a sacrifice for the useless, the outcast, the ones that are left behind by a society that has no use for them. On “Atomic Age”, the scenery changes completely, as we visit a place similar to the Wonder City of Gotham – at least, that’s what the whole song reminds me of. Right at the beginning, guest R.K. Halvørson enters the scene, giving life to a long-lost and very incorporeal barbershop quartet, something that might give the wrong idea to the listener, who might think that it’s all positivity from now on. Dead wrong. The band lunges forward with a steady pace, creating a sense of unease and tension that surrounds the listener, like a beast on the hunt. Middway through this brilliant track, we get an unexpected solo that feels like we are ascending into the heavens, only to be brought back down shortly after, as the dissonant clamor of guitars, bass and drums pronounce the sudden plunge into oblivion, with Zachary’s harsh voice once again hammering on our heads about the impending and mutually assured destruction of mankind via its nuclear-empowered weapons.

“Transmission to Mercury” cleans the rubble left by the previous implosion, as Steve Blanco changes instruments and displays his prowess on the piano, accompanied by a melancholic trombone that is heard in the background. This intro section feels like being on a noir jazz lounge bar, as if we were a private eye on the trail of a case. As is customary with Imperial Triumphant though, things quickly take a turn for the chaotic, with an unrelenting sonic assault and ending with what almost seems like a theatre transmission from the 20s. The title-track follows up as another perfect example of the band being an authentic tour de force with unending creativity. Thunderous, singular and gnarled guitar swings and drum patterns, delirious choral voices and Zachary’s own insanely fathomless growls singing about the number one city that towers above the clouds and takes control over all – a deliciously vile atmosphere all throughout that takes over our bodies and freezes them in place, in a state of total submission. “The Greater Good” is probably the most straightforward and linear track on the record, though it still contains those abnormal guitar weeps and moans, and an overall air of spontaneity. The song concludes with an orchestra that is very reminiscent of the 20s, a film-esque roll of the credits, if you will, where I personally picture the three members of the band walking into a distant mushroom cloud sunset that brings the end of all things, thus ending the record in the most perfect way imaginable. And though it’s not usual for me to speak of bonus tracks in records, the ones in Alphaville are definitely worth the mention – two cover songs, one of Voivod and another of The Residents, that could be considered as an epilogue of sorts to Alphaville. I like to think that was the idea. A special note also to the incredible artwork that renowned architect and illustrator Zbigniew Bielak created for Alphaville, which perfectly encapsulates the themes and vibe of the record, and serves as both critic, parody and warning of the society we live in.

The influences of Imperial Triumphant are, once again, very clear. There is the apocalyptic dissonance of Portal and their ferocious and merciless howls, the freeform improvisation of jazz, the rich and textured experimentation of Meshuggah, Voivod and Atheist, the absurdity of The Residents, the Broadway spectacles, jazz lounges and cabaret shows that filled New York in the century past, and even hints of Diamanda Galás’ omnipresent and haunting vocals. Alphavile feels like a 20s’ theatre play in motion, a perverted drama that moves at a fervent and schizophrenic pace before our very eyes and shows us that the reality presented is very much our own and we are all doomed. Welcome to the roaring 20s of Imperial Triumphant, the masters of avant-garde decadence, the invokers of the golden ritual, the masters of this new, glorious and debauched decade. Welcome to Alphaville.