Nowhere else will you find a festival experience quite like Supersonic’s – since 2003, they have been hosting superior weekends for the adventurous audience, taking care to present only the most artistically relevant and irreverent acts from the UK and across the globe, while simultaneously making sure to fill every moment with opportunities to let loose and party, or engage with talks, and participate in workshops, or take in exclusive screenings and exhibitions. After a forced two-year interim, which resulted in the creation of the well-received online event Sofasonic, the UK’s premier experimental music festival has announced its return and with it, the first batch of names that will participate in next year’s lineup. Welcoming back their old friends, the dark-humoured bard of Newcastle Richard Dawson and Circle, the genre-straddling pioneers of The New Wave Of Finnish Heavy Metal, who will be presenting their new collaborative project together, Supersonic will also receive performances by the likes of The Bug and Flowdan. who will join forces to bring the noise with the heaviest of bass sounds, as well as Buñuel, featuring Oxbow’s very own vocalist, Eugene S. Robinson, and the extraordinary A.A. Williams.

Further down the announcement, we also have the notorious experimental supergroup Old Man Gloom, the Baton Rouge doom-laden collective Thou, the returning June 44, the psychedelic krautrock minimalists Föllakzoid, the experimental post-punk artists J. Zunz and the heaviest ambient drone power couple Nadja. Last but by no means least, thre is also No Home, the moniker of London based, shapeshifting artist Charlotte Valentine, the distorted cacophony of sound of Blue Ruth, the colossal earthsaking duo Bismuth and bleak party bangers of Bloody Head. Supersonic is also immensely thrilled to invite two guest curators for its 2022 edition; one is the immersive audiovisual performance project known as Jerusalem In My Heart (on the photo above) featuring Lebanese-Canadian producer/musician Radwan Ghazi Moumneh and Montréal based filmmaker Erin Weisgerberand, and the other is Decolonise Fest, an annual DIY punk fest that advocates for emerging artists of colour to connect against the global struggles of the legacy of colonialism, and indulge in their love of punk. More names will be unveiled in the coming months, so keep an eye out for further announcements.

Supersonic Festival 2022 takes place in Birmingham, UK, on July 8th-10th. Three-day tickets are available for 130 pounds and can be purchased online via the festival’s website, here. 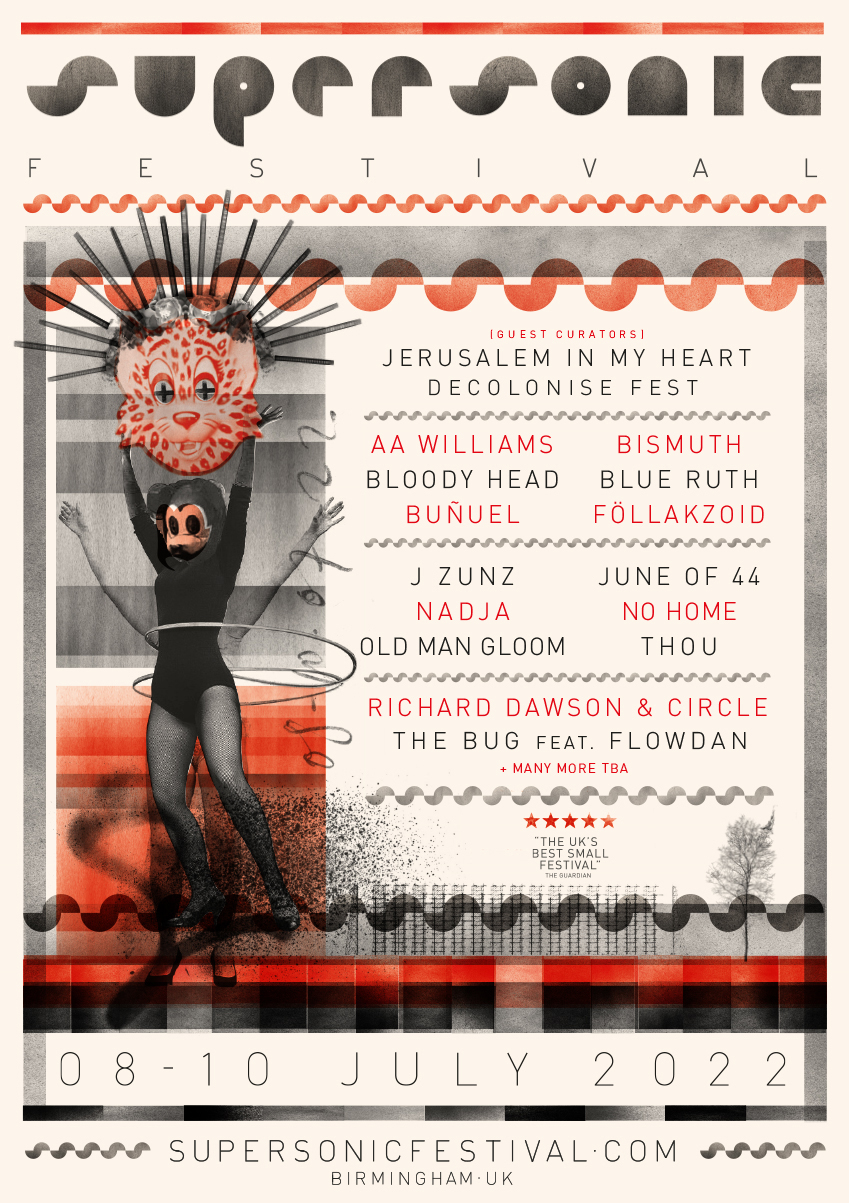