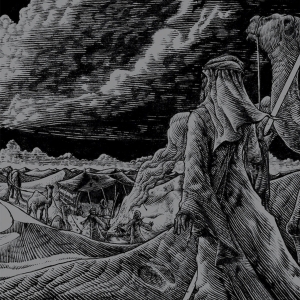 Recently, there has been a surge of bands that mix the harshness and melancholy of doom metal with the intricate repetitions of drone. Bands like Hemelbestormer and Nonsun are picking on ideas formulated by bands such as Dark Buddha Rising and Bong, and evolving them into a new, distinctive sound. The band I will be talking about today, fits this mold perfectly

Born in Israel and now located in Belgium, Wyatt E. are a relatively recent band when it comes to releases. Back in 2015 they released their debut EP Mount Sinai / Aswan, the first record on a planned hexalogy. The second of these six records, Exile to Beyn Neharot, came out last year on September 4th via Shalosh Cult and features two 19-minute-long songs, two rituals filled with an incense aroma and arabic vibes.

“Nebuchadnezzar II”, named after the most powerful king of Babylon, starts with a crescendo of sitars and goblet drums, slowly building up to a bigger auditory piece, once the guitars come in. It gives a sense of exploration, of being in a mystical pilgrimage through the desert sands of Babylonia, all the while encountering strange and mysterious characters. “Ode to Ishtar”, on the other hand, is a different beast. The deep bass sound that starts the song gives way to what could be described as an intense and carefully laid out chase through the dense markets and bazaars. Like its predecessor, it is a rather slow song, but a more straightforward one. Less chaotic, more grounded, but quite enjoyable as well. The heavier side of doom is more preeminent on this one too, with sudden guitar strikes appearing midway through the song.

Overall, Exile to Beyn Neharot is a nice follow-up to the bands previous effort. It shows the growth of the band over the past two years and gives a wider glimpse of what they are capable of. And even though it is far from being the foremost of the genre, it will certainly leave some wanting for more.